Vagueness as Arbitrariness: Outline of a theory of vagueness (Sagid Salles / Springer Publisher) 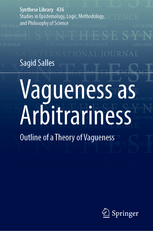 This book proposes a new solution to the problem of vagueness. There are several different ways of addressing this problem and no clear agreement on which one is correct. The author proposes that it should be understood as the problem of explaining vague predicates in a way that systematizes six intuitions about the phenomenon and satisfies three criteria of adequacy for an ideal theory of vagueness. The third criterion, which is called the “criterion of precisification”, is the most controversial one. It is based on the intuition that a predicate is vague only if it is imprecise. The author considers some different definitions of linguistic imprecision, proposing that a predicate is imprecise if and only if there is no sharp boundary between objects to which its application yields some particular truth-value and objects to which its application does not yield that truth-value. The volume critically reviews the current theories of vagueness and proposes a new one, the Theory of Vagueness as Arbitrariness, which defines a vague predicate as an arbitrary predicate that must be precisified in order to contribute to a sentence that has truth-conditions. The main advantages of this theory over the current alternatives are that it satisfies all three criteria and systematizes the relevant intuitions.